Airline travel is a massive industry with multiple airlines vying for user's attention (and fares). However, the vast majority of airline websites and apps are sorely lacking in good user experiences. Startup airline Fly UX aims to use great design and a user centric approach to gain advantage over much larger, bureaucratic airlines.

The project focuses primarily on the airline booking procedure and endeavours to identify key weaknesses and frustrations encountered by users in the process and remedy these.

The method by which users search for, find, book and pay for flights will be investigated and documented. Utilising this research and analysis, a working protoype - along with an accompanying set of wireframes - will be designed and developed.

Will future airline travelers have a good user experience?

This project duration is six months with monthly deadlines.

As it is a student project, the limitiations are obviously far less stringent than a real life client project. New sections will be added as the various course stages are completed over the coming months with a projected completion date of March 2019.

My role in this project is that of the lead (and only!) UX Designer. I completed all activites in the UX project cycle in a solo capacity- from research to design to prototyping. This has resulted in the accumulation of a huge amount of knowledge and many new skills such as;

Airline users are a very broad demographic encompassing everyone from old Mrs. Jenkins down the road who is off to visit her little Sally in Australia for Christmas (first time on a plane would you believe, now, what's this deep thrombosis lark all about?) to Frederick "Feddy J" Jones - top DJ extraordinaire who thinks of VIP lounges as his second home and schedules his airport arrival to the latest possible second.

In many ways, this makes the project more challenging as there is not a clearly defined target audience. Accessibility and ease of use is clearly of the utmost consideration throughout the project cycle to cater for a wide range of abilities and profiles.

A user survey was devised and dispatched to a wide range of participants. The purpose of the survey was to learn more about the goals of people who use airline websites and apps. 29 responses were received with many offering valuable insights into the mindset of the airline user. Some interesting patterns that emerged are noted below:

A recruitment screener was devised to select appropriate users for the usability tests and interviews. Requirements included the booking of a flight in the three months prior to the tests and using the internet on a regular basis.

The usability tests consisted of comparative studies of airline websites and apps. The research objective was to learn about the goals, behaviours and context of airline customers when booking flights.

This (airline) actually recognises that customers are human.

User interviews were also completed with the objective of learning more about the context of use of people that use airline websites and apps.

I check in online, sit wherever there's a seat and take minimal baggage.

In-depth analysis of four well regarded competitor sites and apps revealed a wealth of information about best practices and unearthed some unexpected discrepancies also. This analysis will prove invaluable at the design stage of the process.

The results of this research were intriguing. Every user - even the most tech savvy, well travelled of them - encountered frustrations and obstacles during the booking process.

Why do they think they are difference from any other e-commerce website? (The process) shouldn't be any different from buying a jumper.

All of the user research was analysed and documented in detail. This material will serve as a constant reference point throughout the remainder of the project and inform all phases of the design stage.

On completion of the initial user research phase, the results were assimilated and used to create an affinity diagram.

Post-its were used to highlight user insights and then organised into categories, detailing particular pain points and user insights. The results are detailed in the "Defining the Problem" section.

Further analysis of the user research results allowed for the development of a user journey map.

The above diagram highlights the users emotions at various stages of the process. It is clear that sections that require customer input are unsatisfactory.

It should say whether seat selection is mandatory or not.

The affinity diagram and user journey map led to the identification of clear primary pain points in the user airline booking journey:

Concerned I haven't booked what I think I've booked.

Detailed flow diagrams were created to illustrate the primary user flow (and potential secondary paths) through both the desktop website and mobile app booking processes - from the moment they enter the website to the end point of the booking process when payment has been confirmed. 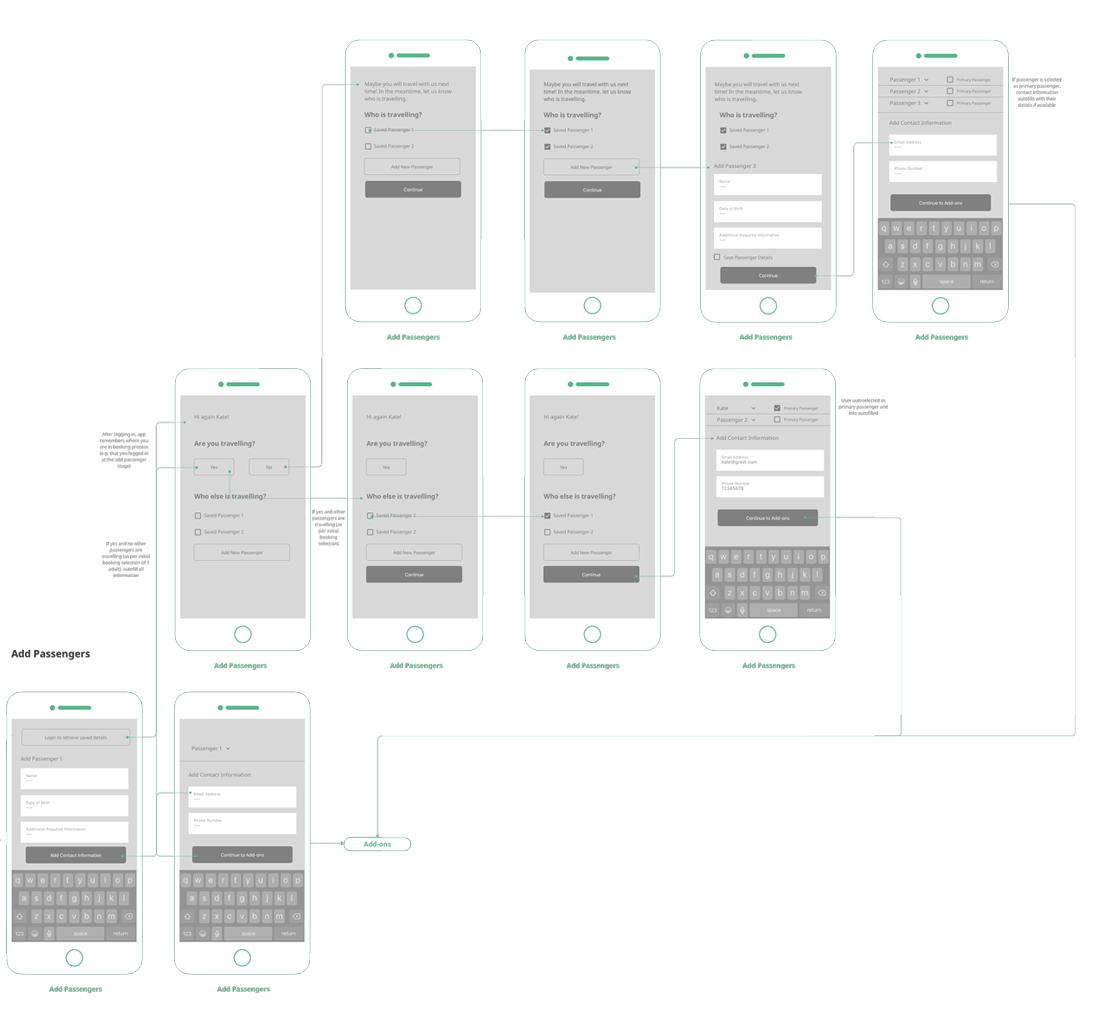 The above sections demonstrate the user flow through the passenger and add-on sections of the booking process. These have specifically been shown as they differ a little from the typical booking process flow. The "add passenger" has a conversation with the (logged in) user and asks a few direct questions to establish who is travelling. Traveller details and contact details are autofilled based on the results of this conversation. The "add-ons" section puts the user in control. Rather than forcing users through all the add-on options to get to the payment point, again, a conversation is initiated asking the user which add-ons they want - if any.

Next up: Wireframing and prototyping! Woohoo!

Have a project in mind? Get in touch at hello@katemc.com